As the interest in my job wanes, from both sides I must add, I wonder if I should have pursued some of the professions I dreamt of in my early childhood, fairground worker or lorry driver.
I love nature, (except sometimes the human kind) I’m vocal on environmental issues, an avid recycler and a vegetarian to boot, but I must confess I do have a vice that flies in the face of all of this, I’m a bit of a petrol head, love motorbikes, old cars, lorries and anything that travels faster than is healthy.
I had two big brothers both with intriguing lives, my eldest always off in far away lands with the army and the other at nautical college, but my eldest sisters husband Ken was a long distance lorry driver. He drove a big red articulated truck and if that wasn’t enough, he drove it through the night, that mysterious time that walled up the village.
Ken was exiting, big, bearded, tattooed, prone to angry outbursts and he swore, something my dad didn’t do, although when he got really angry, usually with a referee or umpire, he did replace an F with a P that didn’t really fool anyone but did manage to confuse us kids.
Ken was a loveable rogue, his outrageous behaviour always forgiven as he was the most fun at any gathering and did I mention the lorry?
In the summer holidays I was allowed to go with him on his journeys around the country. For me it was like Christmas morning, I would go to bed as normal, excitement hiding sleep with all the other horrors that shared my little bedroom with the big cupboard, until I’d be woken never remembering where my rushing thoughts had turned into dreams.
The lorry was always parked next to the blacksmiths, massive and modern against this old wooden building, its bright red colouring turned inexplicably oxblood by the night. 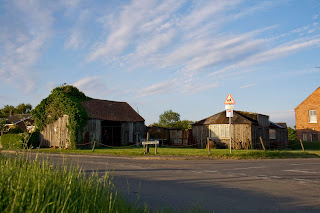 With my excitement building like an illness, I would climb the steps into the cab, taking my co pilot seat and surveying the familiar sites from an unfamiliar setting.
No matter how many times I experienced it, the engine stuttering into life was a feeling to be savoured and feared. The rumble would start low down shaking the cab and every fibre of my body as the shock wave travelled through the vehicle.
With the hiss of the air brakes the lorry would lurch and shudder forward into a world of light beams and road signs.  Like sitting on the top floor of a moving building and travelling on a controlled earthquake, the lorry would be massively out of proportion as it swung around the corners on the deserted country lanes.
These tiny lanes would give way to A roads, which in turn gave way to motorways. He would always say that he took me along to keep him awake, but it wouldn’t be too long before I was laid across the huge engine bay fast asleep, but not before I had the chance to experience the wonders of the road at night.
This was a magical world of giant trucks, carrying impossible loads, a ships propeller, a racing car, other trucks and tons of potatoes, our load. I would awake in some frantic fruit and vegetable market in Manchester, Liverpool or London, to the clanking of forklift trucks unloading our cargo. We would tuck into doorstep bacon sandwiches and sweet sugary tea before heading out on the road to start the long journey home.
Safe in this giant cabin next to Ken, I would feel invincible looking down on the tiny cars that buzzed past, this imagined invulnerability made the news of his death all the more unbelievable.
Two drivers racing each other after a nights drinking, crashed head on into him as he drove to work to pick up his lorry. The news pictures showed a crumpled pile of metal, the unrecognisable remains of his blue car, maybe the outcome would have been different if he'd have been in his big red lorry.
Posted by The Viking at 20:38 6 comments:
Email ThisBlogThis!Share to TwitterShare to FacebookShare to Pinterest

War of the roses 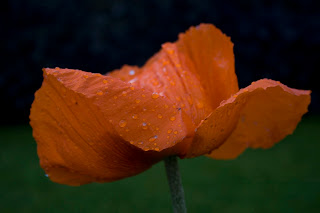 A glorious day, the bluest of blue skies only marred by the scars left by the jet planes as they fly to impossibly sunnier climes.
A pair of buzzards hold a high formation, while swallows scythe the air in insect driven dogfights and a harmony of bees hover like helicopters over the flower beds. 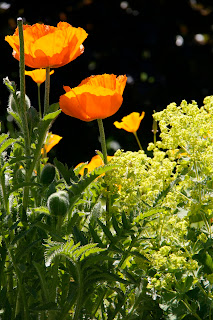 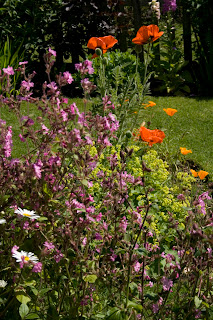 My little garden has turned into a ragged delight, yes there are gaps and some of the stalwarts have rushed through the flowering season, but others are dutifully stepping up to join the fray.
After a slow start the cape daises are finally starting to fill out, brightly nodding and bobbing their pretty heads and holding hands with the their neighbours.
I have been planting furiously, filling any available space with; cornflowers, argyranthemum, love in the mist, cosmos, and any other wild flower that winks at me in the garden centre. They all seem to be loving their new home adding beauty and texture to the neighbourhood. 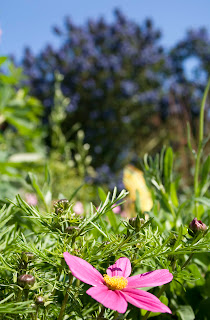 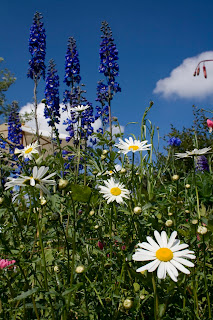 My roses, which I must admit I have had problems with in the past, prone to a touch of black spot or rose rust, have never looked better, or smelled sweeter than now. I bravely cut them right back earlier in the year which seemed extreme at the time but has done them the world of good. 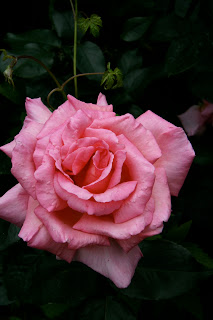 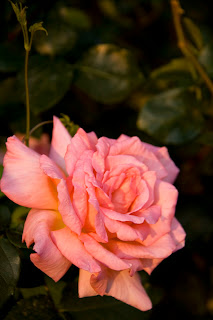 However, there is trouble in paradise, the moment that I have been both looking forward to and fearing has finally come, the builders have arrived. Natures song has been usurped by the hydraulic hiss and bone rattling grind of machinery, where my lovely roses once climbed rubble grows, a layer of dust weighs down the daisies and bricks lay heavy on my mind and lawn.
The extension has begun. 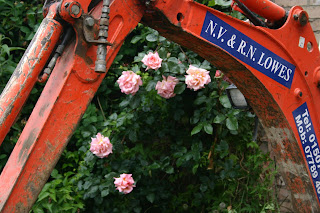 Posted by The Viking at 22:15 7 comments:
Email ThisBlogThis!Share to TwitterShare to FacebookShare to Pinterest
Newer Posts Older Posts Home
Subscribe to: Posts (Atom)