Where do ghosts live?

I must start with a couple of apologies, firstly, this blog is being posted about two weeks late so not quite topical, and secondly for the quality of the photographs, they were taken with my iphone - not my usual camera of choice.

Between the torrential downpours, flash floods and tornadoes, we've had some very nice evenings and some glorious atmospheric phenomena as a result; mists that move like spirits across the meadow, low and legless, leaving body-less heads of all they pass through, or a rainbow - a perfect arch that touched down in the field opposite sitting in front of the trees like a coloured heat haze. 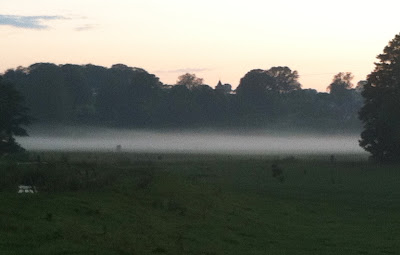 Anyway we’ve been making the most of these breaks in the weather to take long evening constitutionals to some of our favourite haunts.

Swaby valley, always a special treat but after the inclement daytime weather it felt like a blessing on this particular sunny evening’s walk. The top field is wheat this year, still green and spiky from lack of sun no doubt, but beautiful all the same. This sea of green gives way to a section of set aside that has grown to an ethereal cushion of dandelion clocks that take silently to the air as we pass through them. 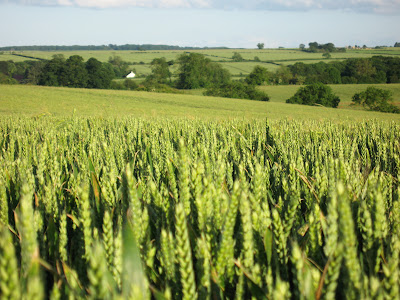 The valley itself is as intriguing as ever, sneaking up on you as you walk through the dark cluster of trees at its entrance. A few years ago they had cleared it of a lot of the vegetation to allow for cattle grazing, though a less suited place for this purpose is hard to imagine.  A babbling brook cleaves through the two halves, with the far side a steep terraced meadow, almost perfect for cattle not of a nervous disposition, but the side we walk through is more sheer with chalk faces interspersed with hardy hawthorn bushes.

Well there is an absence of farm animals this year, which has meant nature has crept back, grasses have grown tall with a perfect dusting of pink seed heads, red and white clover polka dot the floor with the occasional wild orchid thrown in for good measure, cow parsley seems to tower above everything and  the hedges are sprinkled with dog roses.

As always we rested at the bench that some kindly soul has placed at the bottom of a loose chalk face, a comfortable throwing distance from the stream with an abundance of ammunition to hand. I threw a few pieces over to the water but the lack of activity at this particular play spot has meant the brook has become over grown and lost some of its babble, so it took me a few throws before we heard the reassuring splash of a perfect hit.

Another night, another trek, this time by the Great Eau, I happened to turn from the river and my thoughts to look back over the meadow only to see Belleau aflame, our little village cinders against the fire in the sky, a sunset so intense it looked like an eruption. I could almost feel the heat from the red-hot clouds as they rolled like magma across the sky 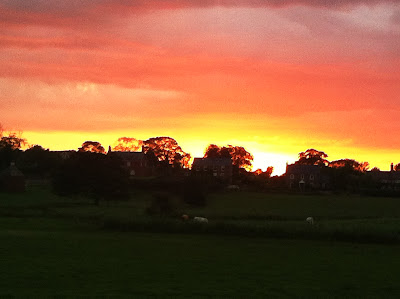 We pulled ourselves away from this majestic event and squelched on through the meadow, creating noisy white ripples in the sheep as they ebbed and flowed around us. While taking a moment to have a seat on the wooden bridge a strange thing happened, from the nervous frothy flock a ewe approached me with her lamb, nuzzled my hand and put her head on my knee, a very touching and some how calming moment. 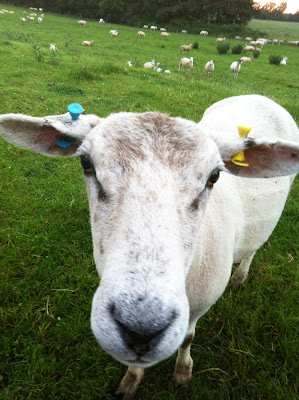 In comparison the river was a torrent, making it easy for the family of ducks that had taken residence at one of the prime swimming spots to escape our unwanted attention by shooting the rapids downstream. Other animals seem to be taking advantage of the conditions and circumstance that has meant a general lack of walking through the fields and inhabited the trails. The hare seem to be travelling in uneasy gangs, as I saw 5 of them on the night in question, I'd never realised what beautiful creatures they are, bunnies are cute but they are most definitely handsome.

After the brief encounter with the sheep and with no particular place to go we ended up at the Tavern, for a pint of cider which turned into two or was that three?

It was about 10.30 when we made our way back, walking across the track between the monstrous rapeseed, so tall this year that it tunnels your vision towards the dark spinney that bars your way home. Tonight there was not an ounce of fear though, I even stopped in the wood throwing a stick or a stone into the water for nostalgia and no doubt habit sake.

However, the sticks in the river were unfetched and the ripples from the stones unchecked and even though I could feel her with me every step of the way, we had actually just been me.

So often had we walked these walks, crossed the river and scaled the valley that the memories were so fresh, each look and touch was still there. I watched her down in the dark river, treading water like an otter before swimming towards the splash of the stones I threw like a snorting tug boat, I heard her splashing in the brook and snuffling up the sheep pooh in the field.

I even crouched down and waited for her to catch up, giving a reassuring stroke as she passed by me, my fingers almost feeling wet from the water from her coat. 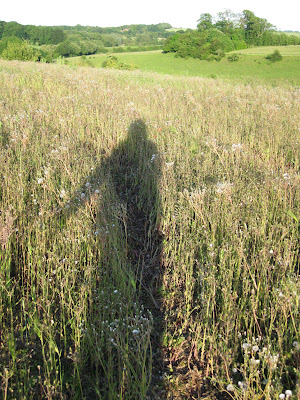 Last week was the first time I'd been alone at the cottage, Holly was either always with us on our journeys to London, or if only one of us had to be there, she baby-sat the other at home. There was a strange sensation of the similarity of difference.

The interesting thing is that it was somehow comforting and made me remember other similar occurrences that I had taken comfort from. One such time was when I had been sat by mum in the hospital, holding her hand as her body went through the motions and fought for breath hour after hour, I had slipped off into half thought and half sleep where I saw mum and her friends as teenagers on bicycles, cycling down a country lane, the sun bursting through the branches of the trees, lighting their faces with laughter, I was brought from this happy thought by the family saying 'she's gone.'

Also recently, I went to Lincoln and was wandering around 'uphill' and had a similar thought, it was of my friend who died a couple of years ago. I saw us laughing and joking in the castle grounds, sitting on the grass and enjoying the sun. It was a time when tomorrows were tomorrow, not something you have to deal with today. Worry was tempered by the time that stretched a head of us and the future was to be found.

I don't mean this to be morbid in anyway, but I thought if ghosts do exist, surely its not in the distortion of death, but in those happiest of places and times and us and our memories are the psychic switch that turns them on.

Posted by The Viking at 17:47 16 comments:
Email ThisBlogThis!Share to TwitterShare to FacebookShare to Pinterest
Newer Posts Older Posts Home
Subscribe to: Posts (Atom)