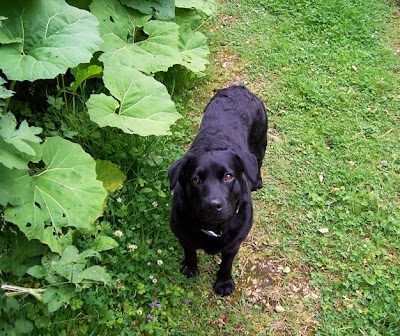 I just wanted to start by saying a huge thank you to all of you who have said such wonderful things over the last week, it's been really comforting and just the ticket.

Obviously, our little cottage has seemed cavernous, the empty sofa that we can't bring ourselves to sit on, the empty bed that still has her cushion on it, our routines shot, views no longer viewed, dinner times missed, but time will change all this I'm sure. I've already managed  to stop leaving the windows open in the car when I go into the shop and going to fill her bowl with water before I go to bed, so I guess that's something.

It seems even the wildlife have got the news, a rabbit has taken to sitting in the middle of the back lawn eying my new plants without a care in the world and the pigeon that Holly gave such a hard time to, has been strutting its stuff right up to the Kitchen doors. One of the dogs in the village that Holly liked,  she was very fussy with other canines only having a fondness for black and white collies, left a gift of a huge pile of pooh for me outside the door today.

Well after a week of downs and further downs, I've had a lot of time to ponder and if not to decide anything, well at least to think about being decisive about decisions, 'probably'?.

Holly's passing has topped off a couple of years that have seen me with more problems than an Italian cruise ship company, so a while back I thought that I would have a go at therapy. After waiting ages for the appointment, last Tuesday was the first session and you can only imagine how that went. I don't know who I felt more sorry for, myself or the poor chap.

Anyway,  with all this in mind one thing has become blatantly obvious and that is that time is precious, I've written it before but it's worth repeating, we treat time as a constant commodity, counterfeit it, trade it and most of all waste it.  My regret as always in these situations is for the time I lost when I was too busy, too self obsessed or too distracted to pay attention to Holly or others who have gone. I wish I could get these moments back, tie them together and enjoy her for a little while longer.

Posted by The Viking at 01:03 18 comments:
Email ThisBlogThis!Share to TwitterShare to FacebookShare to Pinterest 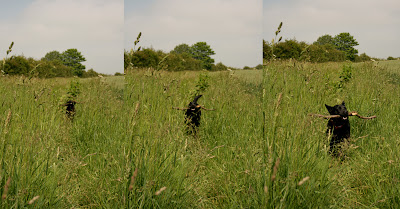 Today a space the size and shape of a small Labrador has opened up beside me. An empty space that weighs as heavy as my whole world, so heavy I don't think I can bear it.

Though black with just a splodge of white, for nearly thirteen years Holly coloured my life in rainbows, but now summers colour has seeped away, the garden is drained to grey, laughter has been sucked from my throat and sadness bars my way.

As those glorious 13 years we shared open up to me, they block all that went before and cloud all that is yet to come. A constant companion, a confident and a friend, she decided my decisions and lifted my spirits, a dependent that I depended on, a smile when all else failed. Oh how I need her now.

Holly stuck by us in our Gypsy lifestyle (we moved 7 times in London during her life, 8 counting the extended stays at 'grandmas'). The loading of the cars, the long motorway journey's, all done without a hint of bother, however, no matter how short the stay, how brief the visit, three has been the magic number, she made every house our home and no more so than the last 9 years in Belleau.

The cottage has always been hers, no room barred to her, no bed beyond her, never overly cloying she always took herself upstairs to bed in the evening, though in her later years she needed a little help from us. She would stand at the bottom stair and look over her shoulder at us until we carried her up. This summer she had discovered her voice sitting on the bed and barking at the cows in the meadow opposite from as soon as you put her down to as soon as it got light.

This all makes the hurt so much harder, everywhere I look I catch a glimpse of her. She was a creature of habit, though like a bank contract these were always hers to change. The new morning routine was meet me at the treat cupboard pre fuss, wait till we had cooked our breakfast before joining us outside for her share. 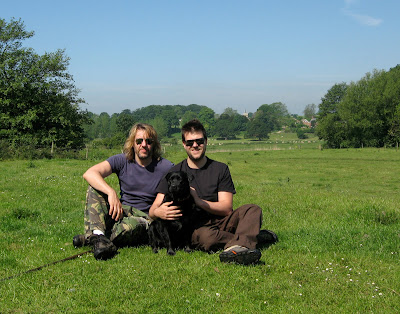 Holly was always with us wherever we went and hit with whoever we met, she didn't dislike anyone, especially if they had food, not keen on children but amiable enough.

She wasn't a working dog, but she had a role to play in our life. Not a guide dog but she taught us to see rather than just to look, whichever way she went we gladly followed. She didn't hunt but did love a chase, foxes were her favourite but I realised thankfully that she wasn't a hunter quite early on. I remember walking her in London when she suddenly got the scent of something, my imagination ran wild, what was this creature she was stalking? She traced her quarry to some bushes, before diving in for the kill.  A struggle commenced but her yelps made me come running to her aid, I tore back the foliage to beat off this fearsome prey only to find her unable to get her head back through the railings as she refused to drop the half pizza she had tracked and captured.

As a puppy Holly did have a stint as a model, she kept her looks till the end by the way, she starred in a photo-shoot  for Home Choice, never one to be won over by the bright lights but always professional, she got the shot done and then proceeded to pee all over the bed.

This has all come so quickly, a week ago today she took us on the longest walk we had been on for a very long time, showing us a way through the wood at a pace we couldn't keep up with, maybe she was rewarding us with a memory. What a difference a week makes not able to stand, or sit, a broken machine still with a puppy's face.

She was always my first good morning and my last goodnight and unlike her a habit I will find hard to break. 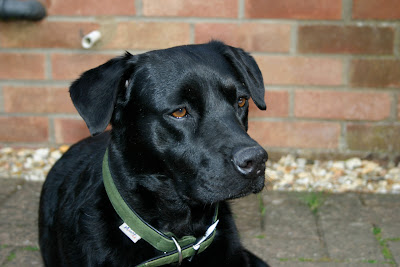 Posted by The Viking at 23:06 18 comments:
Email ThisBlogThis!Share to TwitterShare to FacebookShare to Pinterest

Well we seem to be on a seasonal seesaw at the moment, summer to winter, spring to autumn - well you get the picture. On those heady days when the sun has shone and the freezing rain has stopped, I’ve been able to work in the garden, which has reached my favourite stage, jungle - and what a jungle it's been.

I'm sure I mentioned before but the draught has brought torrential rain and this, mixed with the short sharp shock of sunny days, managed to create the perfect training environment for a few speedy growers to become tall and athletic. These beefed up bullies got a head start over some of the weaker individuals that missed the starting pistol and proceeded to pin these smaller competitors to the ground.

I don’t go for minimalist chic in the garden, I’m much more of the maximalist approach, I see enough brown earth in the winter, so any spec of bare soil calls out for me to plant it. 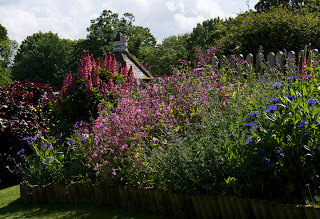 Anyway I believe in a bit of healthy competition and love a good floral fist fight. Like a spiteful child I get a sadistic pleasure from the argy-bargy of the blooms as they wrestle over their little bit of turf, intervening only when the fight gets too dirty. I can almost hear the voice in my head sometimes shouting "fight, fight, pile on, pile on".

Maybe it’s not just the weather that has made the competition so fierce this year, possibly it’s because we are rushing headlong towards the London Olympics, I know this would explain why the lupins have grown tall and twisted like fiery torches. 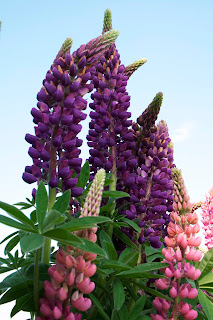 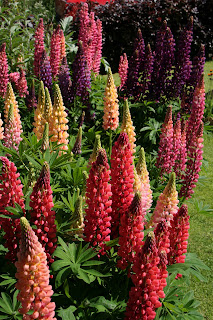 I make no apologies by the way, for the blatant Olympic analogy, especially considering the telly is full of the most tentative links by brands to this sporting event. Personally I'd be a little more excited if it was more like school sports days, imagine the branding opportunities then: the sack race with special limited addition running bags by Louis Vuitton, the egg & spoon race brought to by Tesco's finest free range eggs with silver spoons supplied by Tiffany & Co and of course, the 3 legged race in association with Hermes scarves.

Just like with any competitions these days, there seemed to be some cheating going on, the rabbits helped the Lupins by munching on all their neighbours, while the slugs favoured the lupins by devouring the delphiniums. I don't believe in chemical stimulants so artificial aids to this pest problem have been avoided no matter how tempting, but this has meant me mooching around the garden with head torch and rubber gloves late in the evening, picking slugs off  pampered plants and running around the lawn in the morning shouting at the rabbits like some sort of crazed referee.

However, no matter who was winning and how they managed it, the garden was looking fabulous, even if I do say so myself. More or less healthy, surviving the unwanted attention and rewarding all my hard work and training with a display that was medal worthy, that was until the weather threw another curve ball.

The downside of growing tall, lithe and finely tuned is that it is easy to be hamstrung by testing conditions, in this case the wind.

'Talk about your level playing field' arriving back from London yesterday I found the tearful sight of my main team lying limp, exhausted and broken in defeat where they had once stood tall and proud in victory. 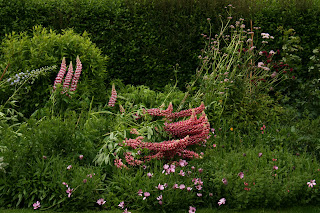 Well onwards and upwards I guess it gives the B team a chance to shine.

Posted by The Viking at 23:09 13 comments:
Email ThisBlogThis!Share to TwitterShare to FacebookShare to Pinterest
Newer Posts Older Posts Home
Subscribe to: Posts (Atom)