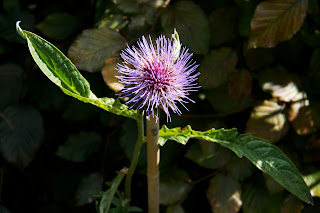 A sky whipped into fire above fields of straw rolled into Catherine wheels, horses given free reign from the rain gallop with manes singed by the flame above.
Trees, hills and houses, their dimensions stolen by the blaze, appear as scorched silhouettes, theatrical cut outs the only indication of where the sky ends and the land begins.
Memory fails me, I'm not sure if it is always like this or the garden's mischievous nature this year is lulling me into a false sense of seasonal calm. It continues to be reborn, flourishing and flowering even while the nights draw in and my evening walks are unnerved by the scuttle of dried leaves pursuing me down the track and through the spinney.

There's a sound clash of summers whispers and autumns crackle as they compete for the attention of the wind, overdubbing, mixing and fading to make a new seasons soundtrack. 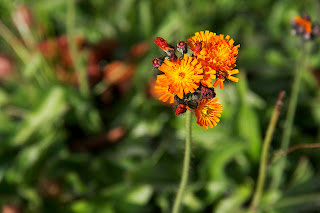 The insects seem to be as confused as me, (or in on the joke), a few bees who must be weary from a summer of work still seem to be bumbling amongst the flowers. The flowers themselves that should be resting or at the very least putting on their winter woollies, seem happy with the company. Recently a humming bird moth, my first of the year, busied itself around the bushes whilst a dragonfly, like a storm tossed helicopter patrolled the flower beds, wheeling and banking to rescue its lunch from the seasonal gusts.

There are some seasonal indicators that have slipped my notice, the swallows left as quickly and quietly as they came and the squadrons of geese that had been practicing their air born manoeuvres over cottage for the last few weeks have obviously completed enough dummy runs and secretly taken off on their mission to warmer climes.

Even though the skies have lost these visitors there's still a lot of airborne action, our ever faithful barn owls patrol the meadow and the clouds of jackdaws swirl, seemingly with a distinct lack of purpose, that is until they spy the buzzards which they hurriedly harry.

It does amaze me how all these birds manage without air traffic control, I stood by the dovecot early the other evening enjoying watching the ducks fly like noisy spitfires in ever decreasing circles, before crash landing from the darkening sky onto the Belleau Spring. I admired the skill and finesse that these sometimes comical birds commanded, however, as I watched their tight knit formation I was amazed to see two of them fly into each other and nearly drop from the sky.

The drama of the weather predictors hints at snow in the forthcoming weeks, if the gardens behaviour isn't intentional, what a shock the flora and fauna will get. The question is now to cut or not cut, is it selfish of me to want to keep the gloom at bay with all this colour? 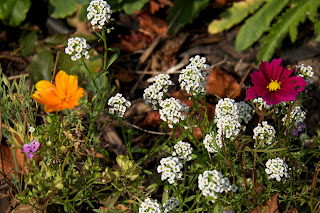 Posted by The Viking at 19:26 5 comments:
Email ThisBlogThis!Share to TwitterShare to FacebookShare to Pinterest

Holiday observations from behind the beard part 3 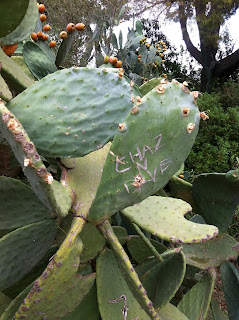 Well,  I think apologies are in order because I am so far behind on my blogging that some of the following posts are hardly going to seem topical.

Anyway this is the final part of the holiday observations, I promise.

If in doubt shout
So, interestingly due to me haunting many of the same eateries and drinkeries on a daily basis, I was able to become very familiar and on friendly terms (in a non speaking capacity) with a lot of the same people, even if they didn't know it. I do realise this was not very scientific of me.

I new what they ate, what they drank and in one case what they planned to do for sustenance at least 4 days in advance, so it was intriguing that even though a lot of the eating and drinking habits of my new pals were often so predictable it would make a cow in a large meadow seem experimental, they didn't bother to learn the Spanish names for any of these items.

Instead, in the good old British way they tended to either talk very slowly making them sound slightly dense and condescending, or shout, because obviously Spanish people are hard of hearing.

Now I have no real aptitude for language, I took French at school and even though it would be easy to blame my failings in this subject on the fact that my tutor spoke french with an unbelievably  strong Yorkshire accent,  that is if it wasn't for the fact that lots of other people in the class managed very well, even if their pronunciation may have been a little off.

I remember in my French aural exam my teacher had said don't be nervous, if you can't remember the French word just use the English one, well as I recall we had the most marvellous conversation about buying fruit in the market, if it was hot or cold etc and I thought it had all gone very well until my teacher couldn't hold back at the end saying 'stupid boy you used more English than French'.

Never the less, even against these linguistic odds, I try whenever possible to try and use Spanish words often to the bemusement of the waiting staff as they speak perfectly good English and my stumbling over words probably takes far longer than if I just shouted my order at them.

One particularly cringe worthy case of Brits refusal of attempting to utilise any form of local lingo was when I witnessed a cockney girl screeching 'waugh-ah, waugh-ah WAUGH-AH!' at some confused waiter, becoming so irate that her boyfriend had to be called to sort out the problem. He gallantly stepped in to aid his damsel in distress adding his voice to the order, "she wants WAUGH-AH! WAUGH-AH..." now this could have gone on for some time if the waiter hadn't finally realised what the girl was requesting and said oh "you want water".

Now a second incident leads me nicely on to another observation. On the night of the rainstorm I was sitting in the market square watching the ensuing chaos from a restaurant with a lovely big awning. I had just used my best Spanish to order my evening meal, so was waiting with bated breath to see if a vegetable lasagne or a new hat would turn up to the table, when an English couple bustled up and sat down at the table next to me.

The couple instantly got out their most treasured possessions, their iPhones (I could tell were treasured because not only were they in personalised pochettes they were also in protective cases) and proceeded to ignore their surroundings and each other apart for the occasional rapport of what highly entertaining thing they had just witnessed on line.

Now this to me is one of the most important observations, everyone seemed to have iPhones, old, young, middle aged, middle income or fair to middling.

The vistas and views shrank and vanished to miraculously appear on finger smudged screens, sweaty palms holding snippets and snaps of a world, small in comparison to the world wide web.

People huddled around these devices, admiring the majestic landscapes they had just stolen, while the scene in all it's glory shone out in front of them.

Why savour the moment when you own it in miniature?, why appreciate the experience when there's an App that does it for you?, memory is a weight that slows you down, i have 32gb on my phone.

Anyway I think this is something for another post, but it did lead to some funny moments, there was an old chap in the hotel who hadn't realised that there is an option of view on the iPhone camera, so had managed to take 34 pictures of himself.

Obviously, there were many more observations as well as lots of people behaving in a perfectly fine manner, but  frankly, the holiday seems so far away now, it is making me a little sad to write about it.