London, what the Dickens?

I’ve been witness to a media gunfight; compliments shot with the violence of bullets ricocheted off a members club wall, while the war cries of good jobs and success echoed around the room.
It all started as I sat in a Soho members club, I was a little too involved in what I was doing to notice that the afternoon was giving way to early evening and I’d missed my window of escape.
The relative quiet was shattered by the tell tale clip clop of the PR ponies as they made their way up the wooden stairs, neighing in competition for conversational space just as they compete for column inches.
I could hear the swish of the their blond manes and the snorts of derision getting closer, the first shot was fired at an unsuspecting waitress, ‘TABLE’, luckily as no eye contact was made the shot went wide.
The table next to me was free but just as I was trying to decide whether to get under mine or push it over for defence the clunk of bags and phones signalled their arrival. I just had to hunker down and hope for the best.
A few more shots were fired at the waitress to make her dance ‘WINE’ ‘VODKA & TONIC’ ‘STRAWBERRY MARTINI’
There was a moment of calm whilst the gunslingers eyed each other, suspicious and supercilious, their smiling faces giving nothing away. Pistols cocked the shooting began; "But darling you're amazing"... "imagine heading up the global division of the agency" ... "what about you, creative director,"... "head of strategy"... "soooooo important"... "queens of the world"..."we’re just the best"..."can you imagine, he asked if I shopped at ASDA, the cheek".
Spent rounds littered the table and the air hung heavy with bluster and bullshit.  The only breaks from the action were when they were forced to reload with important work messages from their Blackberries and funny face book ones from their iPhones
Expense accounts rattled while I shook in the cross fire, this was a saloon bar fight, loud conversation of cash and demanding clients may have replaced bottles and chairs but it was no less dangerous. This definitely wasn’t a recession session that was just something that happened to the other folk.
I needed to make an escape so as the whoosh of wine tossed heads slowed and the aim of the slurred speech became more ragged, I made a run for the door passing the guest list girl and her coral of cocksure cowpokes, a real case of ‘I’m not a celebrity get me into here’
I made it to the street and gulped the barely fresh air, feeling happy my hide was intact and my  morals in order.
Posted by The Viking at 13:35 13 comments:
Email ThisBlogThis!Share to TwitterShare to FacebookShare to Pinterest
Labels: London, Members, PR

This post is brought to you by the number 2

I went for a walk on Friday which was two days ago, down the track and along the river to Claythorpe, by the little cottage in the field and onto the road and back to Belleau, a journey of roughly two miles.
Whilst enjoying this evening constitutional I thought to myself what a difference two weeks make. It was only a fortnight or so ago when winter had finally whispered its first quilt of snow, leaving the land freshly laundered, its lumps and bumps softened and smoothed, ready for the child in me to snuggle down into it and mess it up. 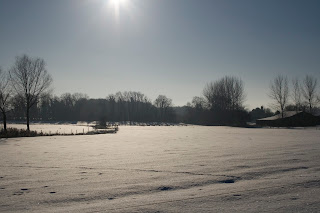 Belleau is always beautiful in the snow, but when the blizzards finally blew themselves out and the freeze took hold, throwing glitter over everything, it was breathtaking.


Moles had been taking advantage of the mellow winter up to this point to cover the meadow opposite in what looked like some sort of brown acne. These surprisingly large mounds now looked like sparkling iced buns, the barbwire fences that offend me a little, hung with crystal hair and the trees held delicate blades of snow on every branch. 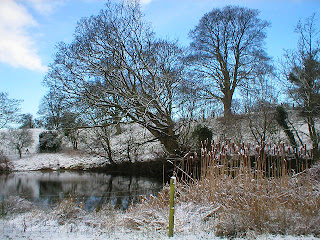 As beautiful and chilly as the days were, minus 2 and falling, the nights were crisp and frozen, skies so clear and cold even the stars seemed to shiver. A full moon so big and bright it sent frosty blue shadows running for warmth.
This winter weather had surprised me and everything else for that matter, as all the tell tale signs were that Spring was already with us; the daffodils weren't in flower but they were already in formation ready for their seasonal assault, the snowdrops had massed and the Lupins in my garden had sent out a scout party. Birds were everywhere, sheep were in the field and scarves were already optional.
Anyway, after what seemed like a seasonal false start, we were back on track and I'm back to my two mile walk. It was late afternoon/early evening, the time when the animals are usually changing shift, but everything seemed to be taking advantage of the lighter nights and hanging around. Spring was springing and romance seemed to be in the air.
In the space of these two miles I saw two Kestrels sitting side-by-side on a telephone wire staring at the horizon as if waiting to view the sunset, two swans on the river looking like 18th century dancers as they circled each other in the current and two barn owls that floated bashfully close to each other before landing on two fence posts to share furtive glances.
Well here we are two days later and what started as a wet miserable day has now turned into a cold snowy one. So as I watch the flurries of snow whirling about my window, I feel the visit to the garden centre was a bit premature and thoughts of mowing the lawn today more than a little optimistic.
Lets hope this isn't Spring's false start number 2.
Posted by The Viking at 14:48 11 comments:
Email ThisBlogThis!Share to TwitterShare to FacebookShare to Pinterest
Newer Posts Older Posts Home
Subscribe to: Posts (Atom)