Apologies, its been a while since I put pen to paper or fingers to keypad for that matter, so here's a quick round up of the last month or so.

Christmas slipped by more mild than merry, no frost, no snow but instead a dose of festive flu that as it happened wasn't just for Christmas it was for New year too.

Flowers bloomed, plants grew and my mood got bluer as my nose got redder. The seasonal spirit wasn't helped as spite and gossip flew in the face of goodwill and cheer.

The weirdly warm weather did gift us with a breathtaking sky though, thick fiery pink impasto clouds daubed onto a bright blue canvas.

The new year wafted in with a whimper but then the wind came with a shriek and a howl. It wrestled the air and battled the land, like a blustering bully it pushed the trees and pulled the plants, it rattled the latches and tossed the trash, its tantrum was terrible to behold.

The morning light revealed the fallen, broken bodies and amputated limbs scattered the ground, while the survivors bowed their boughs in respect. In some sort of gruesome luxury the victims will provide fuel for the fire, very opportune if the forecast of a Russian winter is to be believed. 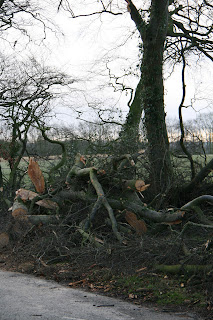 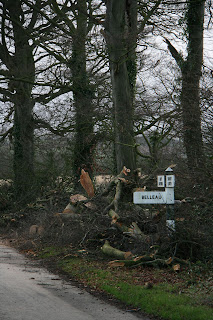 I have to admit I quite enjoyed the drama of the gale, it blew the blandness of the holiday weather away and reminded me of being a child, when I would whirl around in the field on blustery days, letting the wind steal my voice as I shouted and laughed at the sky.

Some of the flora and fauna as mentioned have never really gone away, so it may be a shock to their systems if the freeze that is forecast arrives, however, splodges of snowdrops now dot the verges and daffodils are yawning into the air, I've even seen a dusting of blossom on some trees, and like these optimistic chaps, I'm ready for Spring too.

There seems to be so many birds at the moment from the robins that look like they are nesting in my new woodpile, to the sparrows, tits and thrushes that are making so much noise in the bushes at the front of the cottage.  When there not chasing the tractors the seagulls are slicing through the sky over the meadow like deftly thrown boomerangs competing with the jackdaws for airspace.

On Saturday I saw a gang of six magpies, (thats gold I think), hopping and buzzing with electric calls, a white heron of some sort that floated down to earth not far away from me, gave a derisory look and snaked away through the long grass, a barn owl, but so blessed are we with these that they almost seem common as they float around the meadow.  Similarly with the Buzzards, they seem to be loosing their shyness and secret ways as I managed to get up close and personal with one, before it leisurely took to the air. I do have a question regarding these majestic birds, why do these fearsome looking raptors have such camp cries?

Anyway, to top off this ornithological tour was a treat - a bird that looked as incongruous as I feel in most situations, a splash of glitter in a slippery brown ploughed sea, a glam rocker of bird - a golden pheasant. Maybe there's something to be said for magpie folklore after all.
Posted by The Viking at 10:07 10 comments:
Email ThisBlogThis!Share to TwitterShare to FacebookShare to Pinterest
Newer Posts Older Posts Home
Subscribe to: Posts (Atom)