The edge of season

August nears it’s end and panic begins, like standing on a haystack preparing to jump, the inevitability of summers end freezes me to the spot, though as we are pushed over the edge and fall into Autumn, we realise the landing is never that bad.
This year the garden marked time has toyed with the senses, colour upon colour, growth over growth, playing tricks with the seasons, or is that the other way round?
There have been many times when I thought it had reached its crescendo, impossibly full with flowers so bright they seemed like they were going to ignite, holding this moment of pristine pressure before exploding only to grow phoenix like from the green embers.
Today is such a day, Delphiniums tall, blue and so bold rising from the fiery Crocosmia, their rigidness softened by the pinks and whites of the waving Gaura. The cape daisies whose pallor had so worried me in the spring, have flaunted my doubt by flowering and flowing through uncharted parts of the garden. 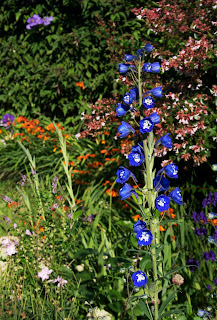 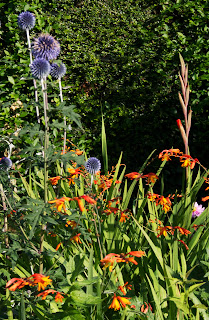 The vim and vigour of some of the plants has tested my own vitality, chopping, clearing and mourning only to see them happily rise from the dead.
The Crocosmia's life force is so strong that even the sections that I cruelly left sat on the path after dividing them early in the season have grown and flowered. 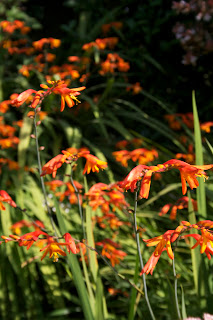 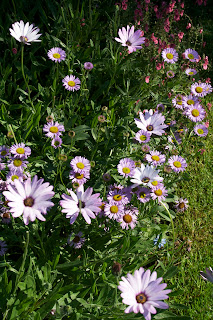 The Black Knapweed has been around since early spring, growing and growing with only burnt bobbles to show on every stem for what seemed like an age and as I couldn't remember planting them my interest was tinged with disappointment, until early summer when they erupted with a thousand purple explosions that refused to be extinguished for weeks.
However, all good things must come to an end so with a certain sadness I cut the darkening leaves and stems down, only to find two weeks later that the pyrotechnics have begun again. 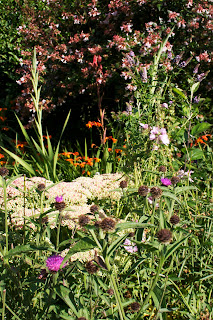 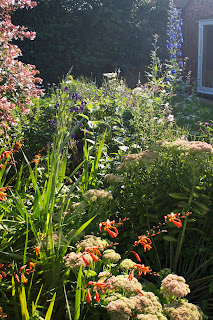 With all of this rebirth and re-growth it is probably time for me to review my strategy and take a running jump rather than waiting to be pushed.
Posted by The Viking at 00:02
Email ThisBlogThis!Share to TwitterShare to FacebookShare to Pinterest