Confidence, an anchor that can't be weighed, a sail that can't be set, becalmed in a sea of ideas, inspiration flutters in and on the canvas but not enough to move the craft along 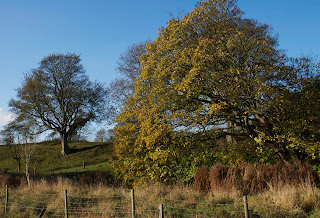 Holly and I have just taken our morning walk, and what a lovely walk it was, the low bright sun flattering and flattening, creating crisp long shadows and iridescent colours.
To carry on this years’ seasonal confusion autumn seems to be optional, while some trees
rattle their leaves in defiance the wind has picked others to the bone.The grass is still green and luminescent, polka dotted with red campion and fringed with fierce nettles that have made the most of the lack of competition and grown angry and strong.

Our morning constitutional took us past the village school, a clump of buildings from the 1800’s that even with the addition of an extension is still small.
When I was a pupil, the school was just two buildings that nudged slightly uncomfortably up to each other. They watched over a little playground that was enclosed by a low fence and some bushy trees.
A small orchard rustled at the back of the larger building and our modest sports field lay to the side of the smaller one, a strip of lush grass not big enough for a track but perfect for the egg & spoon and sack races that we ran on sports day.
The trees are still in the playground and a fence of similar stature still contains it, but sadly this square of tarmac that once rang with the laughter and shouts of children, has fallen silent and empty like so many village schools. 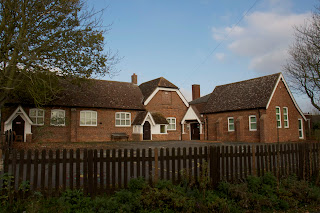 I still vaguely remember my first day and like for most children, it was a day of tears and tantrums. Mum wanted to walk me the short distance to the school but she worked on the land and so was usually dressed in black oilskins and even at that early age I wasn’t keen to be seen with her or hold her hand.
Amongst the usual play and painting of this momentous day there must have been a point where we had been taught to write our names, as when I got home and proudly showed my parents the days labour, dad’s reaction wasn’t what I expected, he was angry, my name was wrong. He was very proud of being a McDonald not a MacDonald
The smaller of the two buildings was the infant's classroom, dark, high and polished to my memory. A schoolteacher from a bygone age, strict and stern, taught us about far away lands and fairy tales. One of my most vivid memories though was an occasion when she smelt something un towards so we all had to take it in turns to go behind a shelf to have our pants checked by her. I can tell you even though I hadn't done anything I was nearly scared into it.
The larger of the two buildings doubled as the juniors classroom and the canteen. The dinners weren't cooked at the school but were delivered by a man in a burgundy red Ford Corsair, which the very sight of was enough to make your tummy rumble. We would watch him with greedy eyes un load the big metal containers full of food, drooling at what delights they may hold.


Unlike some people I have fond memories of school dinners: roast meat and boiled vegetables, spam and salad, bananas and custard, rice pudding and syrup, semolina and jam, butterscotch tart and even sago, I liked them all.  However, among all these delicious delicacies were two things that I dreaded above all else, cheese pie and onion sauce.
I hated cooked cheese as a child and this soggy pastry smeared with bubbling greasy bright orange goo didn’t do anything to appease my aversion to it. The onion sauce was no better, thick white liquid with huge lumps of semi-cooked onion suspended in it.
What made cheese pie or onion sauce days all the more terrifying was there was no option at our school to leave your dinner, even if you didn’t like it. To ensure clean plates the teacher would stand guard over you, jabbing you until every last hideous morsel was loaded into your reluctant mouth.
I can still recall the involuntary gag reflex as the cheese pie made contact with trembling taste buds before being thrown down my throat. Luckily for me at least, these barely masticated lumps carried on their downward journey but I do remember one poor kid with a dislike for milk puddings not being so lucky and throwing it all back up into the very bowl he was being forced to eat it from.
So scarring was this experience that I was well into my twenties before I could get past the smell of cooked cheese and enjoy the delights of pizzas, lasagnes and even cheese on toast.


I guess there must have only been about thirty pupils in the whole school so it was a very family like atmosphere. They were a mixed bunch but generally from similar backgrounds, with the exception of some of the farmers’ kids, though truth be told though there wasn’t many signs of wealth even from them. There was one exception, a boy whose mother was a particularly glamorous farmers wife.
Now I’m not casting aspirations on any of the other mothers, including my own, they were practical and pretty but in comparison to these hardworking wholesome women she was like a movie star. A beautiful blond Scandinavian who drove her son to school in a succession of exotic bright red sports cars. To young to appreciate the beauty but oh how I dreamt of a ride in those cars.
My short lived acting career began and ended at Aby school with an inauspicious start and wholly embarrassing finale. My first role was non-speaking but I did get to be at the front of the stage, using my budding talent to play a weed.
Now if playing a piece of flora wasn’t bad enough, the costume called for me to wear thick green girls woollen tights and as a boy with no dramatic pretensions this didn’t sit well, ensuring a sleepless night and a morning of pleading to no avail on the big day. I was unceremoniously dragged to school, jostled into my position and told to wave like a weed in the wind. I preceded to refuse this and all other direction and simply glower at the gathered audience.
However, some of my natural talent must have shone through in this premier performance as in the next production I was chosen to play the lead, prince charming. This was not only a speaking role but one where my range and patience were to be stretched even further.
The finale called for me to kiss the princess, a girl who was suffering from a cold, lack of a hankie and was obviously saving the sleeves on her princes costume for something special. When the time for the closing ahhh moment came and she puckered up and moved in close I could see the glistening liquid trail from her nostrils to her mouth, prompting me to go off script to the embarrassment of my mum and shout to her “I don't want to kiss her she’s got a snotty nose” I don't think they appreciated any add libbing so I was never asked to be in a play again.

This girl and I seemed to have knack at embarrassing situations, a few years later when we were in the junior class, we had come to an impasse in an argument we were having, so in my wisdom I thought the only way to bring this to a close was to ask the teacher. I dutifully put up my hand and when told to speak I said, “miss she says babies come from your bum, but they don’t you have to have an operation don’t you?" Even though the teacher was a little red faced, she didn't miss a beat and told us we could talk about it later, I don't think we ever did though.
There were only two teachers in the school, the aforementioned slightly scary one and the headmistress, a kind and calm lady from Wales. She tutored us at a mellow pace, encouraged my interest in drawing, even if the subject matter was limited to Spitfires, knights in armour, vikings and the occasional horse. Our stories were listened to and tolerated, no matter how long and rambling, she brought history alive and there was even time for us to learn our tables at a pace that suited our abilities.
All this was brought into stark contrast when I was torn from this comfortable village  environment and thrown into the impersonal pace of the much larger Alford primary in my last year. Here it seemed like lessons were a series of tests by a procession of angry teachers.
In the summer we played the usual games of cricket, rounders or running on our cosy field, but when the season changed and the leaves fell we would take a short walk up the road to the old village hall and partake in an activity that at the time seemed normal but on recall seems slightly odd. No gymnastics or calisthenics for us it was country dancing. We were given partners and whirled, twirled, spun and skipped to the refrains of highland flings and the like.
As we enter into the holiday period I miss those early school days the most. The classroom became like Father Christmas' workshop, with the role of the elves taken by the pupils. We busily made paper chains and calendars from old christmas cards. We collected fir cones and teasels from the fields and sprayed them gold. Every box, board or ball seemed to be covered in cotton wool or tissue paper and dusted with glitter . Every wall twinkled and the ceilings echoed with colour, dinner was a festive feast and we shouted carols at the top of our voices.
It's a pity these voices won't be heard here again. 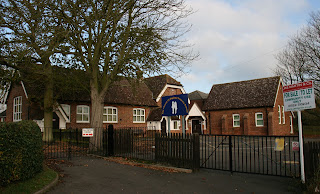 Posted by The Viking at 15:29
Email ThisBlogThis!Share to TwitterShare to FacebookShare to Pinterest