Spring is in my mind 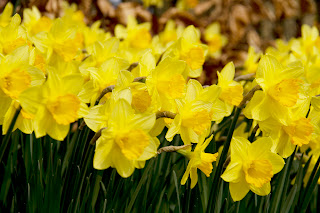 So February passed with its traditional drag of cold and hope, March arrived and left like a lamb as best recalled, leaving its customary smear of yellow.
The daffodils on the front verge that collect so many admiring looks, creating a smile on the ground as well as on the faces of the passers by, seemed to be more abundant than ever. It’s a pity but I can’t own the compliments this crowd of yellow flowers bring, as along with a lot of the plants at Belleau Cottage, they were here when we bought the place nine years ago. We moved in, in September so the daffodils were a fabulous spring surprise the following year and have never failed to delight ever since.
Over the last few weeks I’ve emerged from my depressed stasis, popped my head above ground and got on with some garden jobs, mostly surveying what has survived the winter, the worst winter since blah blah and all that.
I think that part of the problem was the mildness right up to the cold snap a lot of my plants were still in bloom in November, providing perfect little platforms for the falling snow to rest on.
Now a couple of things about my gardening skills or lack of them, mostly I have no idea what I’m doing, but love doing it anyway. The nature, the nurture and the power of the plant, the happy accidents and the tingle in my tum I get from new shoots and buds.
As corny as it sounds, I like the honest labour, where the results shine out from the boarders, especially having a job where the fruits of my effort are becoming less satisfying and more and more unappreciated.
I think the way I garden is much more shop floor than managerial which suits my working class roots and faltering ambition.
I’m not neat and like my garden to have some sort of wild order at best. 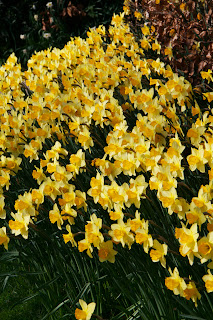 Posted by The Viking at 16:51
Email ThisBlogThis!Share to TwitterShare to FacebookShare to Pinterest
Labels: daffodils, spring