You may have guessed by now that as my life stumbles along like a clumsy bus conductor, I’m using these musings as some sort of therapy, concentrating on the beautiful things around me and experiences, good or bad to stop life’s bus from rocking so much.
It’s made much easier this week as the weather is still gorgeous, if not a little worryingly so and I’m off work so spending time away from London and soaking up the garden and countryside.
I’ve just been for a walk through Rigsby wood, locally known as the Bluebell wood (clues in the name). Every year around this time a blue wash floats over the undergrowth like Monet shading, lightening the floor and the mood. 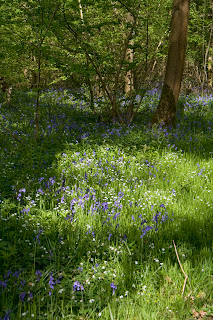 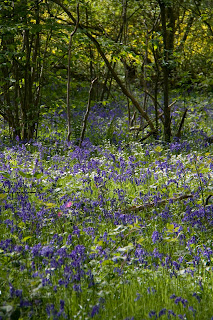 It always amazes me how these delicate looking blue flowers manage to stick their head above the tangled carpet of the wood but even though impressive, I think they may not have won the race this year. Nettles, brambles, ferns and the like seem have stolen their light, possibly due to this enjoyable but slightly freaky early summer weather.
I’m finding it much easier to enjoy these simple seasonal pleasures as I’ve had time and distance to help me appreciate them, seeing rather than just looking.
I have to be honest I couldn’t wait to move to the city feeling the pressure of community and the fear of the unknown weighing me down. It took me twenty years or so to realise people in London are just the same, whether North, South, East or West, the villages are just bigger. 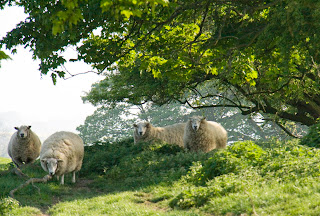 Over the last couple of days I’ve had some David Attenbourgh moments, seeing a flock of heron (not sure what constitutes a flock and I know they are not supposed to but there were about eight of them), a pair of buzzards and our ever-punctual barn owls, which also against popular belief hunt most of the day.


Just in case I seem to be painting too much of a rural idyll, I must admit that our little slice of Lincolnshire is a lot more friendly now for the flora & fauna than when I was a kid. It was not the same countryside as that depicted in the Enid Blyton books, it was working land so while the hippies were having their love ins, some of the farmers were having their own chemically induced experiences, wiping out friend and foe alike.


I remember my older brother and some friends finding a Heron with a broken wing in the field which they dutifully took to the farmer, who opened the door listened to their sad story and swiftly grabbed it by the neck spun it round and gave the floppy corpse back to them.
Posted by The Viking at 12:12
Email ThisBlogThis!Share to TwitterShare to FacebookShare to Pinterest