It's May and usually at this time of year I can monitor the growth in life and gaps in the garden, with just the right mix of surprise and anticipation to relax into some sort of expectation, but what with the unseasonably sunny weather, the back to back bank holidays and the ever present shadow of the recession I’m a little turned around.
There is bonkers behaviour in the flowerbeds, as already outlined in earlier posts, with the back and front gardens behaving like they are in different time zones. 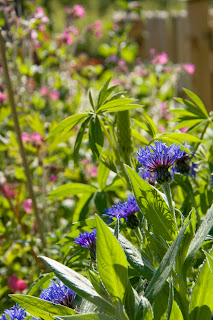 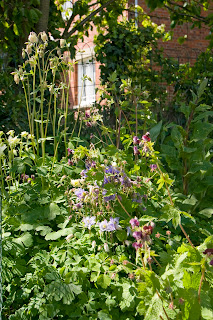 In contrast to the bouncy bushiness of the front and no doubt due to the triffid like actions of some the plants stealing their slow starting neighbours sight of the sky, the back border has spaces and a general ragged appearance. Being a born worrywart I’m not sure whether to let nature take her course or get involved and feed my wild flower buying addiction and over plant. 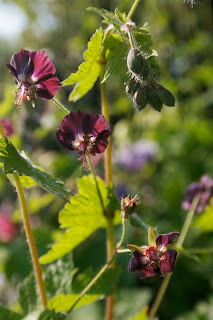 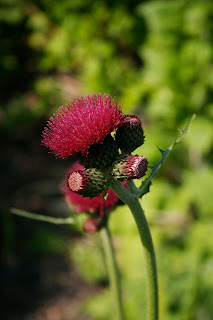 In one of my many vain humane attempts to stop that malicious mole from using the garden as an underground assault course, this badly cut wig of a border is also beginning to look like a mini wind farm with all the children’s windmills powering nothing but my anxiety. 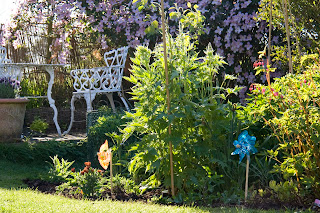 The good news is that reinforcements in the form of a bold-as-brass family of Thrush have moved in and sent the snails into retreat. There is an almost constant and comforting rat-a-tat-tat as armour busting beaks with the assistance of a stone or two, break through the defences of these merciless molluscs.
The clematis has also exploded over all in its path creating a fantastic pink mushroom cloud that hangs over the table and shed. 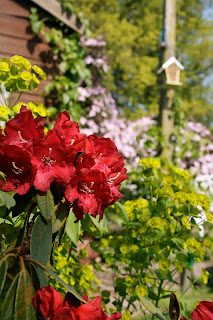 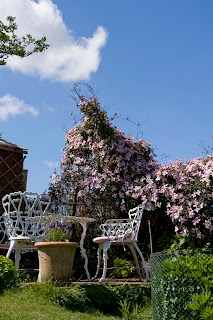 I think my general malaise isn’t being helped by the fact that it’s back to London tomorrow with all its pomp and problems.
Roll on next weekend.
Posted by The Viking at 13:46
Email ThisBlogThis!Share to TwitterShare to FacebookShare to Pinterest