Well, after nearly ten days away from London, the concrete and steel crash of my return this week seemed a little more intense, taking more time than usual for me to get into my mechanised city stride.
Its funny but it feels sometimes that summer is denoted there by the state of dress of the waves of people that wash up against the outside of the pubs and restaurants, rather than natures markers. However, I can’t deny this does have it’s own special early evening lure, it’s the daytimes I find a little suffocating.
This was brought home to me this week on my first day back. As I was riding the tsunami of rush hour commuters from the mess of bags, wires and phone focused faces that make up the tube, I noticed a blind lady taking refuge from this surge of flotsam gushing by.
I offered this castaway my arm and we happily chatted as we navigated what seemed like miles of tunnels, twists, turns and moving stairways, a journey made more perilous because they had closed the normal exit.
We finally made land spotting a gaggle of underground staff flocking in what looked like a feeding frenzy. I led the lady over to them, selfishly breaking up their conversation, as my visually impaired but very able companion needed some help in finding the correct course through the maze of possible exits.
The reply to the blind lady’s request was a casual pointing gesture from the larger of the male staff, backed up with an ‘over there'. I carefully suggested that the 'blind old lady' might need a little more detail, to which he replied to her 'exit seven'. Seeing that we could be becalmed here for sometime, I thought it would be easier if I just took her on to her destination and be a late for work.
We finally found our way to the surface and gulped the barely fresh air, only for me to be accosted by two women, who ignoring the blind lady on my arm asked me if I wouldn’t mind taking a survey.
After breaking away from these sirens we arrived at the Coliseum, the lady’s final port of call, where I led her up the stairs and opened the door for her, however, our fond farewells were cut short, as a family noticing the open door and fearing they may have to put their phones down and open it for themselves,  sailed past us, nudging my blind companion and I out of the way.
The point to all of this was that I learnt a couple of things from the experience: Firstly, being old and blind gives you the super human power of invisibility, and secondly, maybe its better to roll with the waves of attitude and ignorance, as even though this chatty and happy soul was the victim of all the buffering she didn’t complain once, which couldn't be said for the huffing and puffing throng around us. In fact even though she wasn't able to see the morning unfold she had time in all this thrashing about, to feel that it was a beautiful day, a lot more than the fully sighted people seemed to notice. 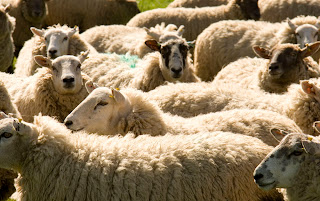 Posted by The Viking at 16:58
Email ThisBlogThis!Share to TwitterShare to FacebookShare to Pinterest