'We will fight them on the peaches'

I thought there would be more time but it’s already started, the casualties are piling up, the wounded begging for help, I’m not sure I’m ready. They come under the cover of night, using stealth and subterfuge to select their targets.
These voracious vandals show no mercy for the maimed and mutilated victims they leave behind.  This is a three-pronged attack, slithering, tunnelling and hopping.
My main opponents are those mucus mercenaries, those rasping rascals who mow down my plants before the flower of their youth.
They seem to be selective in their slaughter, they always used to prefer the higher ranks of delphiniums and lupins but now seem to prefer the infantry of hollyhocks and foxgloves before they reach their lofty heights.
Titch of the Marsh always says to know your enemies and don’t overreact, a philosophy that I whole heartedly agree with, so with cider bolstering my resolve and in full battle gear; head torch, Marigolds and a Tupperware bowl, I took my position sniper style late on Saturday night.
After clearing each plant of the little grey or brown buggers with a marksman's accuracy, I belly crawled through the borders to rescue the next beleaguered bloom.
As always it was with a sense of sadness that I laid these valiant enemies to their salt watery grave.  It had taken me a while to realise that my humane and slightly daft method of catching them and putting them in the green waste bin didn’t work, as against common theory, slugs and snails move a lot faster than you think, managing to escape quicker than you could say Steve McQueen.
I think its time to back up the beer traps with some biological warfare in the shape of nematodes. 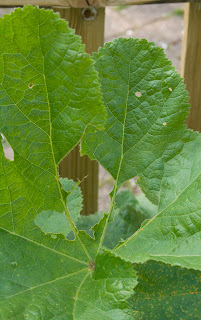 My second nemesis is that tunnelling terror the mole. Two years ago it was the back lawn where I could trace his meandering progress in some sort of stop motion animation style. No amount of expensive sonic or chemical deterrent even fazed him. His drunken journey was only finally stopped when one of my neighbours set a mole trap, something I really don’t like to resort to as even though it sometimes feels like they are persecuting us, they are only trying to grab a bite to eat.
Apparently, getting rid of the culprit isn’t enough, as moles show no respect and take advantage of the labour of others and use their fallen comrades tunnels, so I carefully sliced the lawn folding the grass back like a toupee, and filled the gaps with sharp objects like old screws and stones before back filling with topsoil and finishing off with a grass comb over
My latest guest seems to be loving the back flower border, which I would be happy to share with them if it wasn’t for the fact that he seems to using my new tender plants as some sort of grid reference points, lifting them as he maps out the area. (I don’t know why I keep referring to the mole as a he, but for some reason it just seems thats what he is)
Anyway I’ve reverted back to my humane tactics, using smoke and linseed granules to hopefully send him into retreat. I was given another piece of advice today however, that was to use children's windmills as they cause a vibration when they spin which apparently moles don't like, so it's off to the beach tomorrow to buy some and hopefully have my own mini mole deterrent wind farm.
Finally, a fluffy fur coated fiend, a nibbling nightmare that is as brazen as they are brave, safe behind enemy lines in a cute cartoon character disguise.
She sits on the front lawn, watching us through those actual big doe eyes, oohing and ahhing at her, while all the time she is reconnoitring the territory, so that she knows where the juiciest targets are for when she comes back with her hit squad later that night. (again I don’t know why I think this bunny is a ‘she’)
Without getting too drastic in my retaliation and retribution I’ve gone for simple defence, using some garden netting to protect the vulnerable, not pretty but what barricade is? 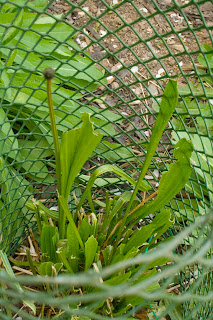 Posted by The Viking at 21:00
Email ThisBlogThis!Share to TwitterShare to FacebookShare to Pinterest