Violence for a vista 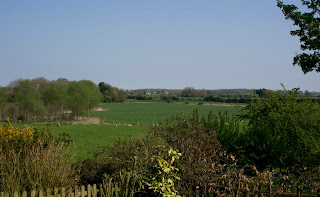 One big scary job that I’ve undertaken is to cut the copper beech hedge at the front of the house. A job I’d been putting off for most of last year, but prompted by looking at an old photograph and the desire to enjoy the commanding views from the front of the cottage, like an executioner I took the saw to them. A necessary tool seeing that they had grown into trees and a hedge trimmer just wouldn’t do.
Anyway, as they are semi deciduous and drop the leaves when the new ones come through, I’m crossing everything in the hope that I haven’t murdered them.
Staying with the front, the new boarder I made last year, has suddenly burst into life, with a few casualties but not as many as I thought.
I really wanted to attract insects to the garden, especially bees, so I used a lot of wild flowers that worked so well we ended up with a bees nest and so many of the little chaps landing and taking off it looked like the skies over Heathrow airport. 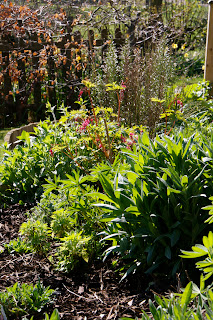 For the first time I tried my hand at growing flowers from seed last year, mainly Lupins and Fox Gloves and to my amazement they grew and survived to such an extent that even after sharing them among interested parties, I ran out of places to put them, so all the boarders are looking a little un-balanced.
What I thought was strange was that none of the plants flowered last year but are looking very whole and hearty at the moment, even if they are stuck in some odd places. 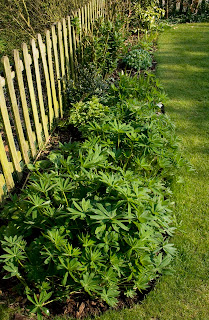 Posted by The Viking at 16:12
Email ThisBlogThis!Share to TwitterShare to FacebookShare to Pinterest